halloween 31/10 - the most imminent opportunity  for demonstrative postures and dedications of burned bridges and other votive offerings. sadly, since the avatars of the gods celebrated on this hollowed day have no corporate existence (they're ghosts, mum), the mess is left on the altar overnight and has to be cleaned up the next morning by migrant workers.

yule dec 21 - not yet repurposed on the calender by the fathers of Avalon or the Brothers of Blighty, nor the Sisters of the Smoke, but a likely date for burying bad news. As usual, more recent rituals will be used as a cover for darker movements.

candlemas fire festival feb 1 - unlike the new kid on the block of nov 5, feb 1 is the original date to appease the fire goddess. It hasn't impinged on the consciousness of the wickermen yet, but it looks like a likely backstop for an inferno of vanities - favourites to be burned at the altar are blond adulterers and latinate pedants.

vernal equinox - mar 20 spring - hope eternal as days and nights are of nearly equal length on this day - at stonehenge at noon, we will find the 24 hours divided into 48% moonlight and 52% sunlight. or is it the other way around? ancient stones do not lie, but they are not very accurate for casting runes, so we often find haruspication employed for precision prediction. The Hare, of course, needs be most afraid for its longevity at this time.

May day went unemployed completely last time around. Perhaps this was to confound any mythos of nominative determinism?

midsummer jun 24 is, according to english heritage, when people look for lost property as the sun aligns over the megaliths and messes up everyone's selfies.

lammas aug 1 - i won't visit the space shoes of the gods again here, but suffice it to say that lammas would make an excellent time to find yourself on a greek island, or perhaps Sicily where the unusual use of umbrellas originated in Phoenicia to keep of the plagues of frogs and locusts and save them for dinner for the Grain Mother.

Harvest festival/autumnal equinox sep 22 - this of course, is now cancelled due to the lack of fruit pickers able to bring in the harvest.

Posted by jon crowcroft at 3:33 AM No comments:

i'm typing this on a 2009 Macbook running macOS Sierra connected to eduroam and then on the computer lab vlan, with a kerberos ticket so that I can access the department filer using NFS securely.
this is mostly so i can upload the picture below, which is a screengrab of my calendar as viewed in calcurse, a neat app that lets you graphically browse your calendars on a "dumb" terminal, which I often use (well, ok, a terminal emulation running a shell via ssh). The reason i look at my calendar that way is that it is a lot clearer than if I use the fancy calendar apps on OSX or android, or web based ones - this got worse in recent years when I started working in the Turing Institute where, like many "hi-tech" institutes, for mysterious reasons all the admin is done using microsoft office (365/Azure based or with web access or whatever). So I'm forced to use an Outlook calendaring system there. Luckily, it is possible to integrate this with one's Google calendar (yes, I have one of these too) and I can then export all the iCal data to a file and synch it via the filer in Cambridge. I can also synch outlook&google direct.

I also have a simple ascii text file in my home directory, which (derives from v6 Unix days) has a date in a standard unix string form at the start of each line - back in the day, Unix had a cron entry that e-mailed you anything in lines with matching dates for yesterday/today/tomorrow, as a todo reminder (this is 1970s tech, of course - still works, but now I have a perl script that translates the text file daily into iCal, and then I synch it to Google and then Outlook synchs that.

All of this is running in cloud servers running in data centers with millions of cores clocked at several Ghz each, and many petabytes of storage, connected by networks running at 10s or even 100s of Gbps, yeah, even as far as the 1Gbps wired ethernet to my desktop in my office.
That desktop used to be a 17" Macbook pro, which worked fine, but cannot run even OSX Sierra (despite being slightly younger than this Macbook, which can) due to Apple mysteriously not supporting that hardware in that OS version. who knows why - all i needed was the kerberized NFS.

So in a cupboard at home I found an 8-year old 15" Macbook pro which supports High Sierra, so I connect that to eduroam; need signon to the lab VLA; need signon; to the kerberos ticket server; need another sign on; to lab db servers (need another signon) =land now my desktop is ok.

So now on all these machines, with super fast cores (even the 10yr old machbook i am typing on has 100Mpbs and two 2.4Ghz cores) and a nice screen and NVideo GEForce graphics etc

and I mostly type text and look at my ascii calender.
it worked fine on the MHz PdP-11 44 with 2Mbytes of memory, a 10Mbps cambridge ring, and a glass TTY connected to a 19.2kbps serial port.

Where did we all go wrong? 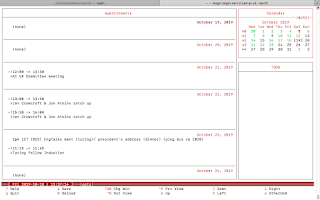 Posted by jon crowcroft at 6:43 AM No comments:

jon crowcroft
misery me, there is a floccipaucinihilipilification (*) of chronsynclastic infundibuli in these parts and I must therefore refer you to frank zappa instead, and go home